What are Cyphers of the First Ones?

Cyphers of the First Ones is a currency used in World of Warcraft’s Zereth Mortis zone. It is used to research upgrades that allow you to progress in Zereth Mortis and earn stronger gear and rewards. You can earn it by completing objectives throughout Zereth Mortis.

In the rest of this guide, I will walk you through how you can farm cyphers and talk about how to earn cyphers more quickly.

Farm Cyphers of the First Ones faster!

Before we look at how to get cyphers, I want to make sure you know about the Improvised Cypher Analysis Tool — an item that gives you a 50% boost to all Cyphers of the First Ones. To unlock it, you’ll need to research the Altonian Understanding trait from the Cypher Research console and then complete a short questline.

Altonian Understanding is the trait in the second row of the console’s Aealic (Console Upgrades) column. It takes 5 days and 18 hours to research with a cost of 160, but it is worth getting as soon as possible.

Once you research the trait, you can pick up a quest called Broken Circle from Hanoa the Exile. You can find Hanoa off the road north of Firim’s cave (see map below). The game should also show an exclamation point on your world map to help you find Hanoa.

After completing Broken Circle and a few subsequent quests (up through one called Jiro to Hero), you will gain access to a vendor named Olea Manu. Olea will sell you the Improvised Cypher Analysis Tool for an investment of 150 Cyphers of the First Ones.

If you are serious about farming cyphers, I would aim to unlock the analysis tool as fast as possible in your upgrade path. Unfortunately, you’ll need to do a little cypher farming to get it first, so let’s talk about the 8 main ways to get Cyphers of the First Ones.

The first way to get Cyphers of the First Ones is to collect them from treasures and chests scattered throughout Zereth Mortis. In addition to one-time collectible treasure, you’ll often see random minimap icons for a Cypher-Bound Chest.

I recommend that you download the HandyNotes and HandyNotes: Shadowlands addons if you aren’t using them yet. They are amazing because they add the location of one-time treasures to your minimap with little tips on obtaining them when you hover.

Keep your eye on your minimap and open these to get anywhere from 2 to 5 cyphers.

One of the more lucrative ways to farm cyphers is by completing daily quests. When you first unlock dailies, you can do 2 per day for 18-22 cyphers a piece.

However, if you want to get a bigger bang for your daily quest buck, you can add a 3rd quest to the rotation as well. To do this, you’ll need to research the Altonian Understanding trait I talked about above. Once it is done researching, you’ll notice an additional daily quest in Pilgrim’s Grace (eastern Zereth Mortis).

Between the additional quest and the Improvised Cypher Analysis Tool, researching Altonian Understanding as soon as possible is one of the best things you can do to earn cyphers fast.

In addition to daily quests, you can also earn a boatload of cyphers by completing the Patterns within Patterns weekly quest. You can pick it up from Bolvar in Haven. To complete it, you’ll need to fill a progress bar by finishing world and daily quests, collecting treasures, and killing rares.

Once you turn it in, you’ll be rewarded with a chest called Tribute of the Enlightened Elders. Opening the chest will give you a handsome sum of cyphers, somewhere in the ballpark of 150. Not bad for a bit of time spent roaming Zereth Mortis!

If you are looking for a massive stack of cyphers for a small time investment, make sure you kill the world boss, Antros, every week. He can be found on the northernmost island in Zereth Mortis. To get to the island, you’ll need to take the Zovaal’s Grasp teleporter that can be seen on your world map.

Like every other world boss, you can enter the area and click the eye in your quest log to find a group. Once Antros goes down, you’ll be given a nice haul of around 80 cyphers!

Another way to farm cyphers is by defeating one or more of the rares in Zereth Mortis. You can see which major rares are up by looking at your minimap or callouts from other players in chats.

However, some of the smaller rares don’t show up on the map, so it can be helpful to download the HandyNotes and HandyNotes: Shadowlands addons I mentioned above because they also show the location of every rare!

If you are looking to farm as many Cyphers of the First Ones as fast as possible, you can log in every day, kill rares, and earn 2 to 4 cyphers for defeating each. It seems like a small amount, but there are nearly 30 rares in Zereth Mortis, so it can really add up!

In addition to regular treasure chests, there is a chance for puzzle chests to randomly spawn in Zereth Mortis. If you stumble across one, you can use 9 Pocopoc energy to break it or 2 energy to solve it.

Some puzzles are challenging, so players use the energy to break them open. While this is an okay strategy, I recommend you download the Zereth Mortis Puzzle Helper addon if you are struggling.

I wrote a guide about how the Zereth Mortis Puzzle Helper addon works if you want to check it out.

One of the more unique ways to earn Cyphers of the First Ones is by interacting with 1 of 3 types of Echoed Jiro in Zereth Mortis. To interact, you’ll first need to research at least one level in the Creatian trait (3rd row in the Metrial column).

Once you have level 1 Creatian unlocked, you just need to summon your Pocopoc and approach an Echoed Jiro. When you click on them, they’ll give you an option to spend 1 Pocopoc energy in exchange for a 15-minute buff.

Making the trade will buff you and reward you with 2-4 Cyphers of the first ones.

There are 3 different Echoed Jiro and buffs you can collect to earn up to 12 cyphers each day. You can receive the buff as many times as you want each day but only get the cyphers once.

The 3 types of Echoed Jiro that offer buffs include:

I know you might be tired of me saying it by now, but the best way to find each type of Echoed Jiro is to use the HandyNotes and HandyNotes: Shadowlands addons. After installing the addons, you can simply open your world map, click on the silver chest in the top right, and then enable Echoed Jiro from the checklist.

If you are opposed to using the addon, you can also unlock the Echial trait under Metrial to have Pocopoc mark Echoed Jiro on your map.

This isn’t really a way to farm cyphers since it can only be done once, but it is good to know about. While working through the 3rd chapter of the Zereth Mortis campaign, you’ll be rewarded with 125 cyphers.

You can also complete the 3 puzzle intro quests that Firim offers to earn 5 cyphers a piece — for a total of 15. If you are new to the puzzles or find yourself struggling with them, check out my guide to the Zereth Mortis Puzzle Helper Addon.

If you are looking to farm Cyphers of the First Ones, the best thing to do is pick up the weekly quest first thing, kill the world boss, and focus on completing daily quests every day. For players with a little more time to invest, you can grind out treasures and rares throughout Zereth Mortis to get an extra boost to your cypher stash.

MORE FROM THE SHADOWLANDS 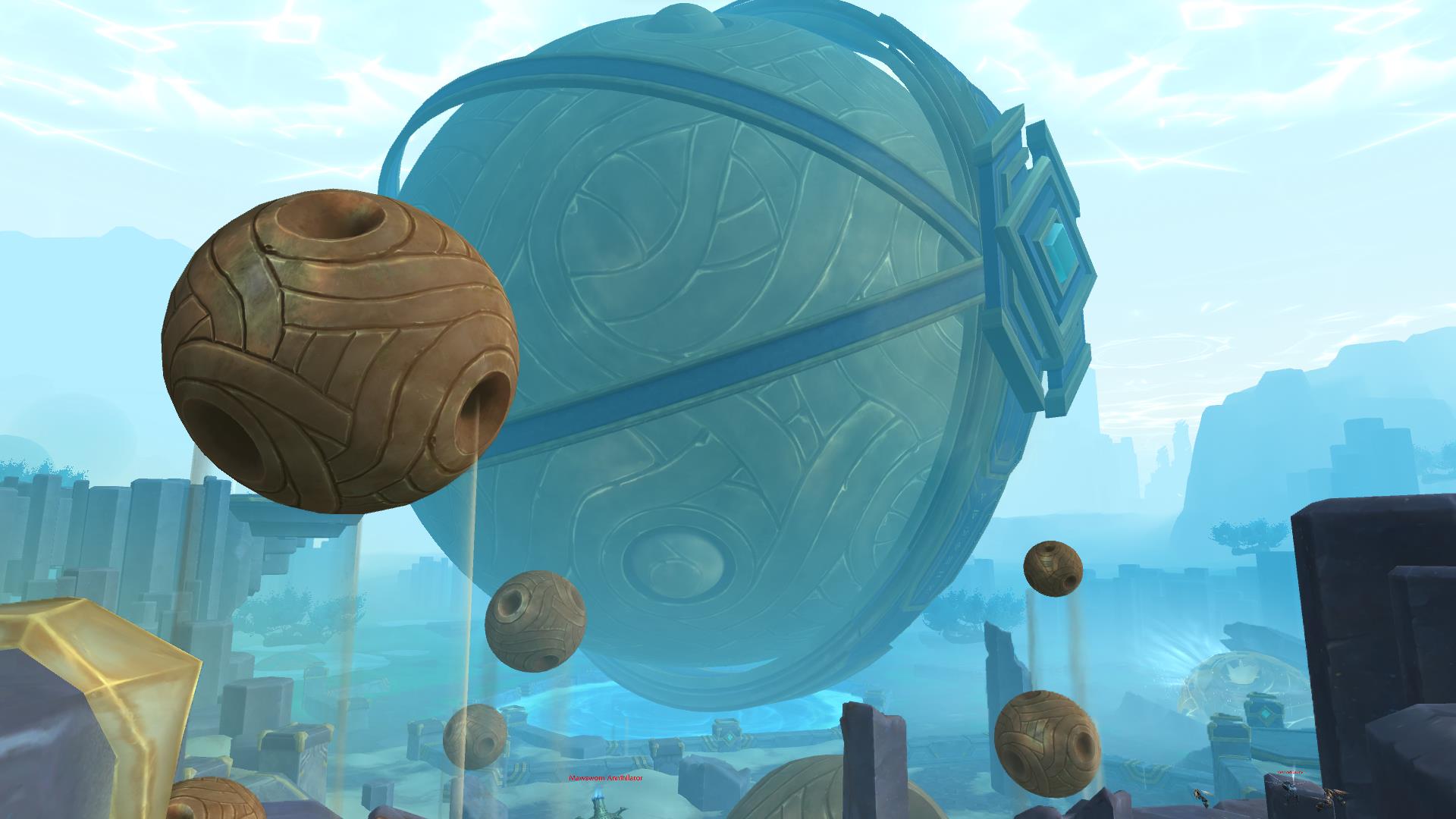